Filed under: Everything Under the Sun — explorergarden @ 6:05 am

Filed under: Everything Under the Sun — explorergarden @ 6:01 am

Eulalie was the second chicken to make an egg. We didn’t know she was laying until one day she went missing. Three chickens were present and accounted for — and one was gone. The green-eyed chicken, Eulalie. A long search had us ready to head to the neighbors’ house to see if she’d hopped the fence. Then we saw her — curled up under a bush against the house. And underneath her fluffy feathers — an egg. No, 2–3? Then 3 more? Holy Chicken! Eulalie had been hoarding eggs for a week!

Later I heard her crowing and Bk-Gawing! She had laid another egg, and this one GIGANTIC! That egg turned out to be a double yolk egg.

Now we get an egg a day from Eulalie, and almost as many from everyone else. What a treat! 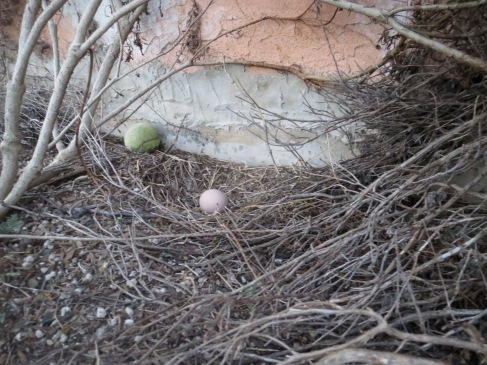 Discovering the mysteries of family as I help my Dad simplify his life.

This WordPress.com site is the cat’s pajamas

Ingredients for a Beautiful Life!

There's a Book for That

Bring new life to your garden!

Reflections on Leadership and Learning

I am a reader, a teacher, a writer, a thinker, a reviewer, and a dreamer of dreams.

A meeting place for a world of reflective writers.

"I like nonsense, it wakes up the brain cells." — Dr. Seuss

A community of readers

Thinking Through My Lens
Bug Gwen